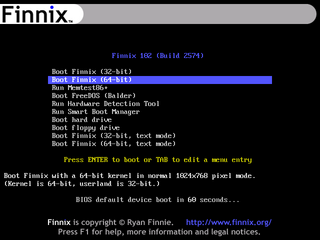 Finnix 102 includes the recently-released Linux 3.0 kernel, and is a slight departure from usual Finnix method of closely following Debian kernel development. Config management was based on Debian pre-release kernels, but patch management was handled internally, basing only partly on Debian. Linux 3.0 support was tested heavily throughout the Linux 3.0-rc process.

Finnix 102 includes XZ (LZMA2) compression of the compressed root and initrd, resulting in distribution savings of more than 20% over previous Gzip compression, and no measurable reduction of boot times.

While Finnix has included Xen guest recognition since Finnix 86.1, Finnix 102's AMD64 kernel now includes built-in Xen pvops guest support. Therefore, Finnix may now be booted in a Xen environment with no extra building or configuration. Simply use the included linux64 kernel file, the initrd.xz initial ramdisk, and the Finnix 102 ISO as a virtual block device.

Finnix 102 is the first Finnix release, including Finnix 0.03 way back in 2000, to include 486 support, though it has not been tested. This is done by not including PAE support in the x86 kernel. The downside is x86 computers with more than 4GB of RAM can only use 4GB with the x86 kernel. However, nearly all computers with over 4GB RAM are also 64-bit capable, so the AMD64 kernel (default on capable platforms) may be used.

Anyone sending photographic proof of Finnix being booted on a 486 (showing Finnix boot plus the output of /proc/cpuinfo on the screen) will be given a free Finnix full-color CD and free Finnix stickers.

While the PowerPC G5 platform has remained a supported platform since PowerPC support was introduced in Finnix 88.0, it was never tested before release, due to lack of hardware. Now a Power Mac G5 DP/DC model is available for testing. The full list of platforms tested include: 586, 686, AMD64, G3 NewWorld, G4, G5, Xen.