Notice: Some or all of this page references features in a development version of Finnix that has not been released yet.
Finnix 121 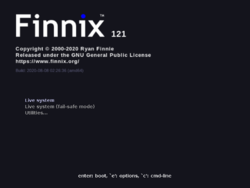 To verify download integrity, please use the provided OpenPGP signature. Download finnix-121.iso (the main file) and finnix-121.iso.gpg (the detached signature), then run: